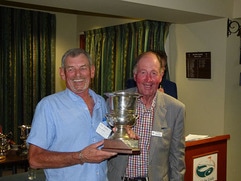 Results from the Chisholm Links Golf Club, host to the 2017 National Championships 27th-30th March 2017
A great week in Dunedin, we had a rainy cold day on the Sunday preceding the Nationals, however Monday was fine, this continued throughout the week until the final round on Thursday when a very thick fog enveloped the area, this delayed the start, for many up to three hours, some of the early starters played up to 6 holes, before the fog came in again.
Everybody was again playing by 12 noon, under blue skies and a warm sun, our new members from Otago were the major winners of the Open grade.
Ben Patston from the Balmacewen Club, Dunedin, was a worthy winner of the Open, with rounds of 72,72,74, and 69, Ben leads a life many of us has passed by :) after playing four rounds with the lefty's, he had a day off on Friday, played Senior Rugby Saturday, then Sunday played 36 holes Pennants for his club.!!
Another Otago man, Mike Wray was Runner up in the Open Division on 293, Mike mentioned that his father, some 25 years ago was also a member of our Association.

Side Note: Shane Chatterton (Weedons Golf Club) playing off an eight handicap fired a magnificent 71 in his final round for a net 63, a great effort from Shane only two shots back from overall winner Ben Paston and one from 2nd placed Mike Wray.
A man at home with the links surroundings won the Senior grade, Dave Fraser, of Scottish origins, now from Alexandra, played very steadily all week with (304) rounds of 78,73,79 and 74, holding off evergreen and the remarkable Geoff Ingram 329 total gross.
If there was a disappointment, it was that we had a scarcity of lady lefties in the field, but thank you Andrey, Harriet, and 9 holer Daphne for competing.
Hopefully more will come to Taupo next year. John Solly won the Bob Charles trophy for the Overall net. Stan Mathews seems to save his best for our Nationals and won the Barry Turner trophy for Seniors Overall net,
The major raffle prize a $500 travel voucher was won by Alan Brown of Queenstown, who we saw again the following week at the 5 day Central Otago Classic, along with a number of other Lefty Members.
Inset: John Barber(right) Presents Senior Open Trophy to Dave Fraser
Thank all for your attendance at our 2017 Open Championships, with particular emphasis to our friends from over the Tasman, we look forward to seeing you all in Taupo 2018.
- John.B